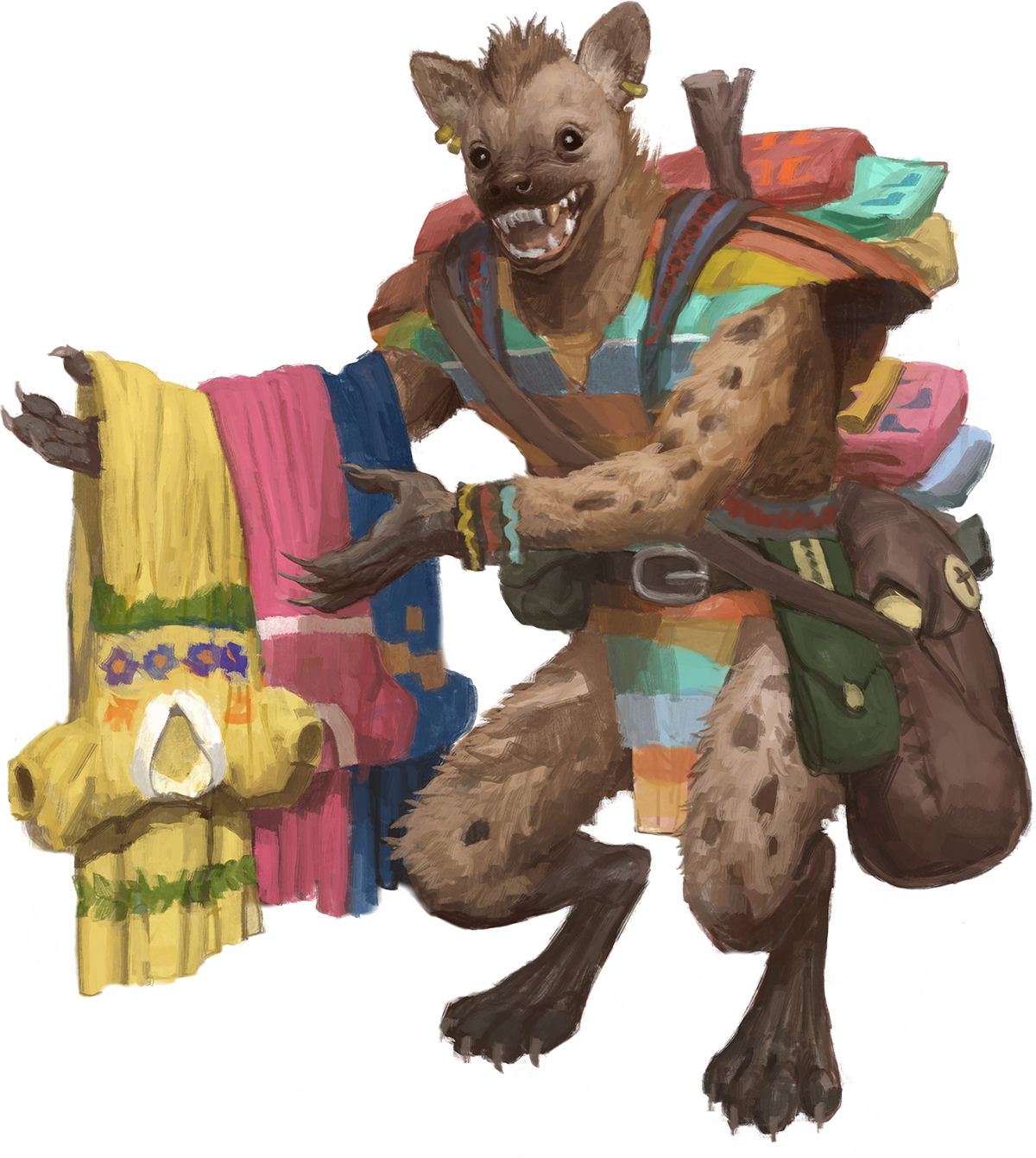 On many worlds, gnolls are a monstrous race who worship gods of chaos, death, and destruction. Occasionally, though, they can escape that stigma and become valued members of society. On the world of Theia, for example, gnolls are respected for their knowledge of textiles and their ability to raise beasts of burden to help run their trade caravans.

Physical Description: Gnolls typically appear as humanoid jackals, hyenas, and pharaoh hounds. Those native to the country of Borboto dress in sophisticated colors, while their more feral cousins in Wutente prefer tans and grays that aid them while hiding in and around dunes.

Society: Gnolls are not known to keep their own society, prefering small packs and families, either as hunters or when protecting caravans. The closest structure the race has to leadership comes when one must make decisions. If a fight breaks out, the rest of the pack does things the winner’s way, while those opposed are either killed or shunned.

Relations: Borbotos Gnolls have fought with orcs for as long as they can remember, but they otherwise get along with the other races that live in or frequent their country. Since they raise some of the best mounts for the sky races and caravans that travel the country, they are treated well by their hosts when a family visits a city between jobs.

Gnolls outside of Borboto continue to live in tribal communities, where they are known to fight with dwarves and orcs over patches of desert. While still willing to act as protection for those seeking passage across wastelands or salt flats, they lack the connections to other races that their cousins have developed and cultivated over time.

Alignment and Religion: The feral gnolls in Wutente are chaotic neutral, bordering on evil. In contrast, their cousins in Borboto lean more toward good, although they can still be a challenge to work with when there’s a misunderstanding. Gnolls capable of understanding religion often worship the god of travel and luck, or the god of destruction.

Adventures: Exiled gnolls and those without family will adopt a pack and adventure with it. Borbotos gnolls are natural barbarians, clerics, rangers, and zealots.

Names: Gnolls often have a name by which their family refers to them and another representing who they become as they mature. It is this name that many gnolls present to the world.

Family Names: These tend to describe either a task the family is known to do well, or a physical distinction between them and other gnolls. Examples include: Brokenearth, Chipgrin, Spot-Bearer, Sunseeker, Treefinder, and Worldpainter.

A sandthumper is typically a 5-foot-long stick (for a Medium creature), with a hollow cap on the end that can be made of wood or metal. The cap is filled with 1 lb. of heavy beads that rattle when the stick is shaken vigorously or slammed onto the ground (thus, the name). The noise made by the weapon is known to keep animals in line, granting a +2 circumstance bonus on Handle Animal checks. A creature carrying a sandthumper without at least marital proficiency in its use suffers a –4 circumstance penalty on Handle Animal and Stealth checks.