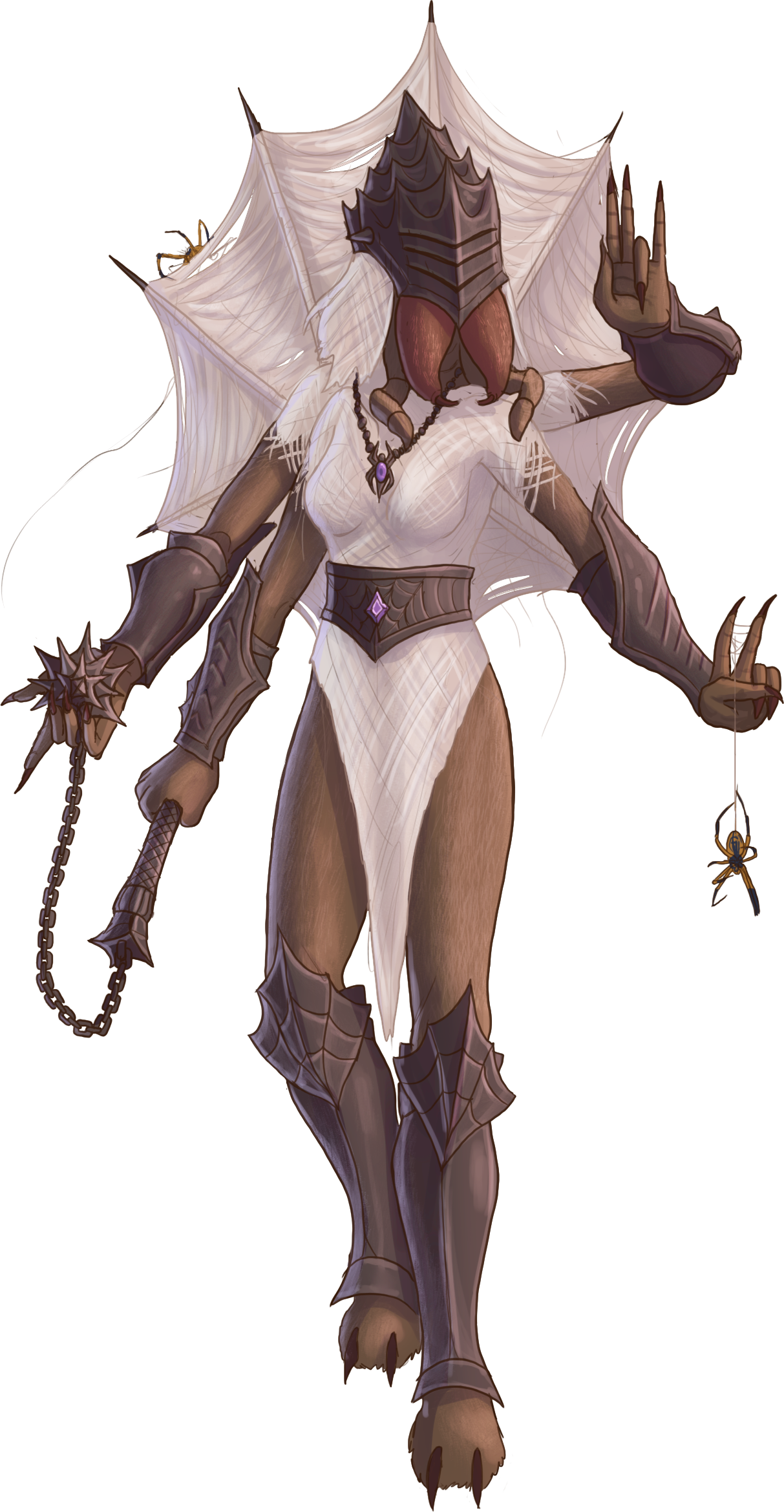 The Duanala is an ancient, spider-like being feared by celestials because of its ability to capture and consume their divine power. Untold deities have been lost to the Duanala before they could even develop their gifts or grow religious followings.

But the Duanala is not an evil creature. It is recognized by some as a bringer of balance—keeping the numbers of divine entities in check so that they don’t rip the cosmos apart with their infighting. It is not known if the Duanala is one undying beast or thousands who repopulate like the arachnids they resemble, but it is believed that the Duanala will remain to the end of days, feasting on godlings and growing fatter still.

Over the eons, knowledge of the Duanala has found its way into mortal minds. Worshiped under as many names as it supposedly has children, the Duanala is always depicted as a counter to the demonic gods who use spiders to evoke fear. Some worship the Duanala, taking its name as their own and practicing ritualistic transformation of their own children into the semblance of the God-Eater. Those who take the magic in stride are viewed by their people as living gods themselves, to be devoured by the Duanala when they pass to the realm beyond life. It is an honor some seek to avoid for as long as possible.

Not all members of this race take on the aspects of their patron. Some who have been blessed by the Duanala appear to be human in every way, and only by using their gifts do they reveal themselves as anything more.

Physical Description: Fully transformed duanalas have the features of arachnids, including multiple eyes and a pair of vestigial arms. They are often covered in a very light coating of hair that makes them extra sensitive to the vibration of the air around them.

Society: Duanala society focuses on individual comfort while protecting the group. Most duanalas prefer to live secluded from others of their kind, but stay close by in case they need to band together to fight off invaders or other threats.

Relations: Duanalas hold firm to their beliefs in individuality, and they try not to push their agendas on others for that reason. They get along equally well with barbarians, monks, paladins, and rogues, and most remain cautious of others while trying not to judge anybody for their past.

Alignment and Religion: By its nature, the Duanala entity is chaotic, but paladins seeking a balance to the divine still draw power from it as equally as invokers whose pacts ultimately lead them to perform the ritual and become duanala themselves.

Adventures: The duanalas’ natural agility and strong personalities make them great bards, rogues, and sorcerers, but their own specialized training as makari suits the spider-like race best.

Names: Duanalas who live as humans and other races often keep their own birth names, while those who undergo the ritual of transformation use it as an opportunity to adopt a new, more accurate name to portray their chosen heritage. Such names might seem campy to other races, like Arachnida or Taran Tula, but the duanala take them seriously and greatly appreciate anybody who can do the same.

Cleric: The cleric adds +1/2 to the number of uses per day of the exoskeleton domain power. At 1 use, the cleric gains this power and can also use it in place of another domain power that is normally usable for a number of times per day equal to 3 + the cleric’s Wisdom modifier.

Druid: Add a +1/4 luck bonus on the saving throws of the druid’s animal companion.

Makari: Increase the number of times per day the makari can use arachnid physiology by 1/4.

Paladin: Add +1 to the paladin’s energy resistance to one kind of energy (maximum +10).

Ranger: Add a +1/4 luck bonus on the saving throws of the ranger’s animal companion.

Rogue: Gain +1/4 on all Acrobatics, Climb, and Stealth checks.

Sorcerer: Add one divination spell from the sorcerer/wizard spell list to the sorcerer’s spells known. This spell must be at least one level below the highest spell level the sorcerer can cast.

Vigilante: Gain +1/4 on all Acrobatics, Climb, and Stealth checks.

Witch: Add one divination spell from the sorcerer/wizard spell list to the witch’s familiar. This spell must be at least one level below the highest spell level the witch can cast. If the witch ever replaces this familiar, the new familiar knows these bonus spells.