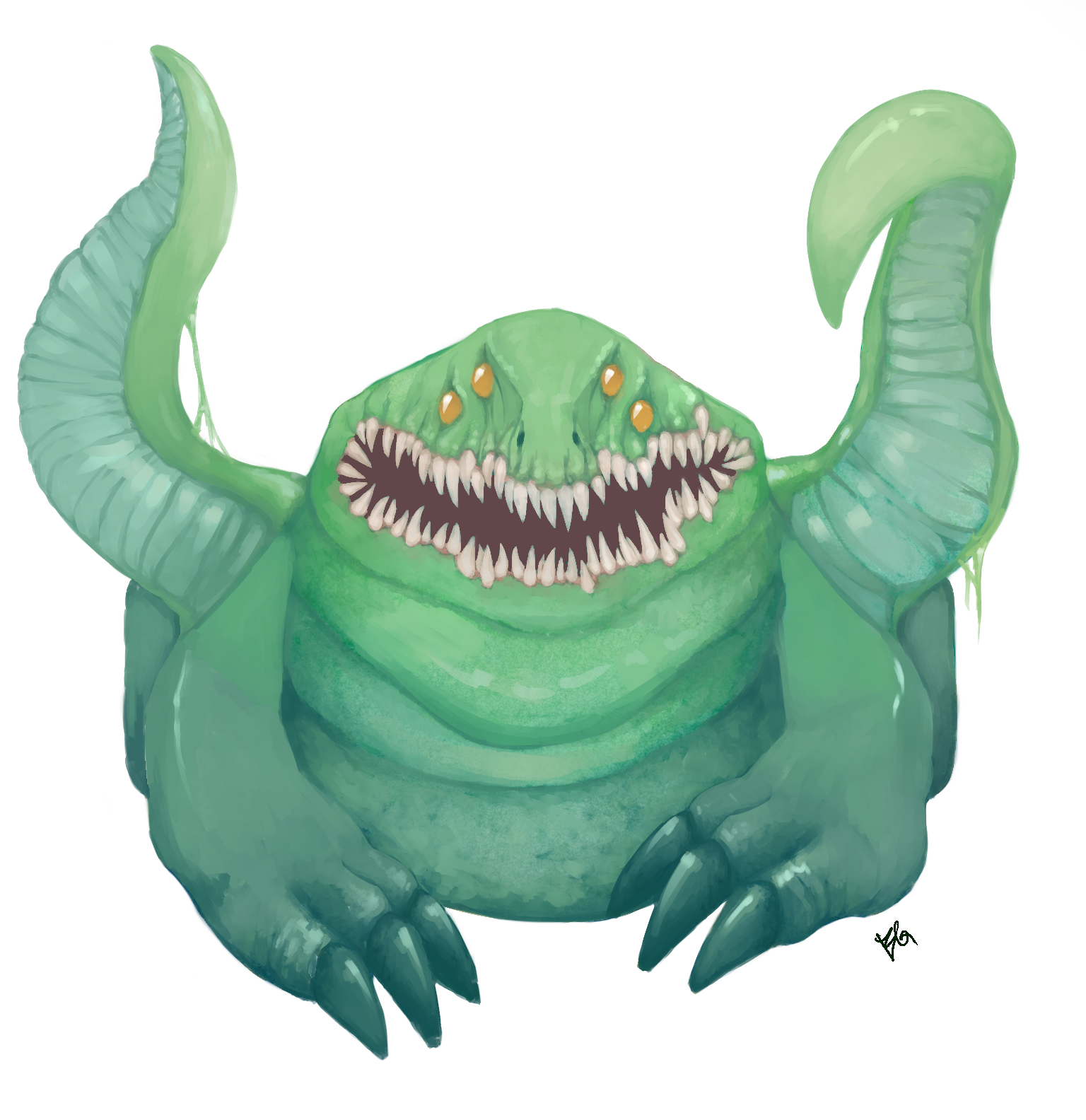 The dalet race is an offshoot, or cousin, to otyughs. Unlike their dastardly kin, dalets prefer to live quietly, surviving on the garbage and corpses they can scavenge. Long ago, the race sold itself out as street sweepers and cleaners of public areas. They are rarely seen and even less likely to be interacted with by most beyond those looking for some information related to the area or the people therein.

Physical Description A dalet, or blorp as the race calls itself, resembles a cross between an otyugh and a toad. They are squat, with slimy, somewhat amorphous skin and four beady eyes placed over a round protrusion that acts as both a nose and a mouth. Because of their natural shape, dalets find it difficult to wear armor, even when magically sized for them.

Society: Dalet society is a matriarchy wherein the queen of the hive births the children until she dies and is consumed by her successor. The males and non-queen females act as drones who leave their home in search of refuse to consume and turn into energy for the rest of their kin upon return. Some races have recently taken to adapting the energy created by dalets into small power sources and spell components. A single dalet would take its entire lifespan to create enough energy on its own to sell or otherwise take advantage of.

Relations: Most races find dalets repulsive, but accept them for the tasks they perform. Those who get to know a dalet find a surprisingly intelligent being who is always willing to help a creature that would call it friend.

Alignment and Religion: Dalets worship their queen, or a deity the queen worships, almost by default. They rarely decide on their own to follow a particular religion. Most dalets are neutral, but can adopt the alignment of those with whom they interact most.

Adventurers: Dalets adventure when their food source runs out or they are expelled from an area by creatures believing them to be otyughs. Because of how other creatures tend to ignore them, they make good rangers and rogues. The dalet’s natural toughness may lead it to become a monk or kineticist.

The following racial archetype is available to dalets:

This spell draws in up to 25 lbs. of debris per level within range and within your line of effect and uses it to construct 1 junk golem per 2 levels. The golems appear anywhere within range and act immediately, on your turn. Once created, the golems can leave the range of the spell, but can only be given commands while in range.

Once the spell ends, the golems disintegrate, destroying the debris used to construct them. Any remaining debris falls to the ground in collected piles distributed evenly between the golems.

Dalet clerics can choose trash as a domain, gaining access to leftover magic discarded by other spellcasters.

Granted Powers: You can recycle the magic that remains after others have used it to give yourself power.

Magical Resurgence (Sp): You gain the ability to copy the magical affects of other creatures for up to a number of rounds each day equal to 3 + your Wisdom modifier. When a creature you can see and hear within 30 feet of you casts a spell of a level you can cast with a duration greater than instantaneous, you can use a standard action on your next turn to replicate that effect, choosing new targets as appropriate. The duration of your effect lasts half as long as the original (minimum 1 round), to a maximum of your rounds of magical resurgence. You can end the replicated effect early as a free action.

Instantaneous Resurgence (Sp): At 8th level, you can use magical resurgence for 2 additional rounds per day. In addition, you can spend 1 round of your magical resurgence to copy the effect of an instantaneous spell cast since the end of your last turn by a creature that you can see and hear within 30 feet of you. The effect is only 50% functional, dealing half damage or gaining a 50% chance to fail (if non-damaging).

The Book of Many Things, © 2018,Samurai Sheepdog; author Kevin Glusing.