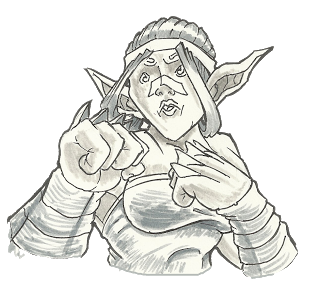 The Jonagites claim to be the descendants of a large adventuring party who became isolated in a foreign land centuries ago. They discovered incredible technology in the depths of ancient ruins, but found no sign of its creators. The original members of the party never saw true civilization again, but their semi-settled descendants survived through unconventional tactics and advanced body modification, and returned to Arkady.

The Jonagites used magical alteration to enable their Dwarven and Elven members to breed, a feat normally impossible due to complex biology.

This magically-induced breeding and small genetic pool has in many ways left them physically weaker than their predecessors, but their determination to survive and the knowledge that is the legacy of their adventuring ancestors has produced a people who are not to be trifled with.

Physical Description: Jonagites are short, wiry humanoids that have assumed the aspects of many “common” races. Males and females alike range from between 3 and 5 1/2 feet in height. Males of the species are capable of truly impressive beards and occasionally have fur on their ears as well. Their ears are elfin but gently curving, as opposed to the straight ears of aelfar and hulder. Their hair spans a range of diverse but muted colors. The most prominent traits of their varied ancestors has become diluted in time, but a general adaptability and mild but justified paranoia remains.

They are capable of long lives, as old as 200 owing to dwarven and elven blood in their veins, but they rarely survive past 120 as poor health frequently takes them before.

Society: Jonagite society is often nomadic. Small in number and possessing no “native” country of any reasonable size, they have few permanent settlements, though insular communities do arise in a particular nation.

Leadership in Jonagite society is typically determined by competence; in most communities the Jonagite leader is elected for life. However, his rule can be challenged by any adult member, typically at the end of each month or season (to prevent sudden challenges from interfering with daily business).

They are practical to a fault; frivolity is often viewed as a sign of weakness, and vanity taboo. They are frequently traders, tinkers and rogues, and they also make phenomenal healers and doctors, though they are often lacking in “bedside manner.” They are known to purvey powerful stimulants and narcotics with both practical and recreational benefits; this can cause conflict with certain morally inclined nations.

They are quite permissive when it comes to relations with most races, provided that the two individuals are strong, trustworthy and capable. Though same-gender and even same-family relations are acceptable in Jonagite society, a child-bearing marriage with a non-Jonagite is a civic duty in many communities, and such individuals are expected to put aside their personal feelings in order to fulfill it. Leadership in Jonagite society is typically determined by competence; in most communities the Jonagite leader is elected for life. However, his rule can be challenged by any adult member, typically at the end of each month or season (to prevent sudden challenges from interfering with daily business).

Each community has their own unique trial, ranging from highly ritualized duels to intense, prolonged games of strategy. Technically a challenge can be outright denied, but denying several challenges in a row in this way will undermine the people’s confidence in the leader, and is dangerous, since it might encourage others to remove him from his post in a more “direct” manner.

Relations: Jonagites are tolerated nearly everywhere, but being accepted is another story altogether. Their chief allies and compatriots are the Aelfar, as they share a kinship with these fellow outcasts. Dwarves admire their craftsmanship but cringe at their origins, while humans regard them as more than a bit shady. Orcs hold no respect for their scrawny bodies and cautious, aloof demeanor. Hulder tolerate them only for the purposes of their knowledge, and quite personally loathe them for their “polluted blood.”

Alignment and Religion: Jonagites are rarely religious; their few clerics tend to follow whichever religion was common where they were raised, and they tend to be healers rather than divine warriors. Jonagites of all sorts tend toward neutral, chaotic neutral in particular owing to the strange way their minds work – but countless exceptions to the rule exist, and the rare Jonagite paladin is among the fiercest soldiers to be found.

Adventurers: Jonagites, ironically enough considering their origin, rarely adventure for the mere sake of it, practical beings that they are. However, they are acutely aware that they are a race in sharp decline. A Jonagite may seek to journey with a party of adventurers in order to obtain medical or magical knowledge that might improve the lives of their fellow Jonagites. The less scholarly-minded among them still know that the chances of meeting a strong and capable mate are much higher in an adventuring party.

Jonagites were designed for the Caneis campaign setting, but their story and origins are more than suitable for other d20 fantasy settings.

Players are likely to encounter Jonagites living in areas where many other civilized races would not; in repurposed strongholds or ruins that have been reclaimed and readapted for their own purposes, for instance. If they are friendly, they may offer aid and shelter (though rarely without strings attached of some sort) or they may simply be merchants, who peddle many rare and exotic goods from foreign lands. They carry with them a tradition of skilled healing, and many seek them for aid when confronted with a grievous illness or curse.

Jonagites also make dangerous enemies. Jonagites with particularly debilitating conditions, too great even for their medicinal skills to solve, may have their allies turn to thievery to sustain them or even fell magic, requiring blood or soul sacrifice, to cure them, and may seek to subdue an adventuring party for that purpose. And though most consider themselves refined enough to avoid such barbaric behavior, it is not unheard of for a band of Jonagite travelers to kidnap or coerce a potential mate, so as to bear healthier children for their race.

Above all, Jonagites excel at making simple plans and carrying them out simply and skillfully. Rare is the Jonagite mastermind who sends a group on a false quest to destroy them, when a well-placed symbol of death or explosive will end the quest early and eliminate any possible loose ends. Likewise, the Jonagite with a heroic bent will eschew the quest for the holy weapon and the blessings of a goddess in favor of taking on villainy with superior numbers and the element of surprise. When faced with the proverbial Gordian Knot, expect the Jonagite to be the first to suggest 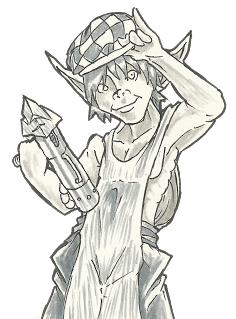 When creating a Jonagite PC, with your GM’s permission, you may select any of these character traits:

The following feats are available to a Jonagite character who meets the prerequisites.

(Because Mother of Invention feats are not actually dependent on racial traits, it is possible for a non-Jonagite character to take them as normal feats; however, the procedure would need to be performed by a Jonagite surgeon, and it is highly frowned upon to operate on outsiders. This would be an option only for a highly-respected ally of Jonagite leadership, or, even more unlikely, non-Jonagites with knowledge of their well-guarded technology – and even then for a substantial fee.)