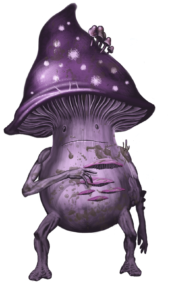 Within the fey realms, few sights inspire awe like the neon mushroom forests. There, mushrooms tower over the purple earth like the redwoods of the Material Plane and emit a bioluminescence of spectacular neon colors. Violet, pink, green, and blue emit from the gills of these treelike mushrooms.

Even the undergrowth and creatures in these forests are alight. But not all creatures care to be seen.

Buried in mud beside the glinting streams of these forests are a peculiar and shy kind of fey: madcaps. These small creatures have fungi and moss covering their bodies.

They have beady black eyes, a small nose and mouth, and hands like roots.

Though madcaps are often born in solitude and are shy, they desire the companionship of friends. But their stench, lack of social etiquette, and tendency to bumble from one sentence to the next can distract others from their otherwise kind demeanor.

During times of joy, a madcap grows spores that create others of its kind.

Of the few friends madcaps have in the mushroom forests, witches are the most common. In fact, the first madcap was born from the remains of a fey witch’s familiar.

Madcaps are small, mushroom-like creatures who grow fungi along their bodies. They have beady black eyes, a petite nose, and a mouth like a slit. Their faces are expressionless.

Madcaps come in bright colors, from neon orange to purple, as well as greens, browns, and black. A madcap’s skin has a slick film to it, and what little hair they have grows short and thin. They have long, thin arms and legs, and their hands are rooty. Although most madcaps have a mushroom cap, some simply have a stocky head, atop which mushrooms and moss grows like hair.

As they prefer to sleep in the mud, madcaps are rarely clean. Often growing up in swamps or deep within forests, madcaps commonly don clothes made from ferns and other plants. Some choose not to wear any clothing at all.

Madcaps reach maturity in under one year and can grow to be as tall as three feet. They can live to be upwards of 45 years old.

Madcaps are born in dense mushroom forests, where the earth is purple and the canopy glows with clusters of neon mushroom caps. Born from spores that have been released by others of their kind, madcaps live in isolation or are adopted by witches and other unusual creatures.

Madcaps struggle to grasp the intricacies of social interaction, even as they attempt to mimic others’ behavior. Pass or fail, madcaps crave close relationships and will cling to those who accept them.

Madcaps have poor hygiene and eat dead plant material and carrion. The latter point may be off-putting to others, especially when a madcap gifts a half-gnawed leg to someone who was kind to them.

Madcaps treasure knowledge. This, in part, is due to the fact that they carry some of the knowledge of previous madcaps. Day to day, they take careful notes. Faced with an obstacle, they refer to previous observations and use deduction to predict the best course of action, making them self-sufficient.

Madcaps reproduce in a similar manner to mushrooms. During times of great joy, they grow spores along their bodies that fly off in the wind. If the spores find moist patches of soil to settle in, up to three madcaps may grow from them. Infant madcaps, called cappies, open their eyes on the first night after they emerge. They grow rapidly and are able to walk and speak a few words within a month, given that their voracious appetites are satiated through this time.

Madcaps or adventurers who wish to raise a cappie may choose to plant madcap spores in a pot. In these cases, cappies will remain in their pot until they are able to walk and care for themselves.

Madcaps who choose to be parents can be overbearing and clingy with their children.

By the end of their first year, a cappie reaches maturity and is fluent in at least one language.

Madcaps are short, and they’d easily be swallowed up in a crowd if not for their stench. Though they may fumble when trying to fit in, madcaps are thoughtful and tough, making them reliable party members.

Madcaps value meaningful relationships. Aware of their own flaws, they’re willing to overlook flaws in others. For those they truly love, madcaps will offer up gifts and become obsessive.

Madcaps work best with those who respect their quietude but still seek out their guidance. Temperamental creatures may find madcaps act as their voice of reason. But while madcaps shrink from the limelight, they like to be recognized from time to time.

Madcaps can be of any alignment. They often adopt the ideologies of those who raised them. Those that grow alone, however, lean toward neutral alignments, developing their understanding of the world from the wild.

Few madcaps stray far from home. Those who do choose to in order to accompany a close friend or relative or seek out companionship.

Madcaps are commonly born alone outside of civilization and have only their tenacity and intellect to help them survive. They may struggle to navigate the intricacies of social interaction.

As a race born from the remains of a familiar, madcaps crave companionship and are adept at magic.

The following feats are available to a character of this race who meets any listed prerequisites.

Benefit(s): You can infuse your poisons with sparkling fey magic to affect creatures that are normally immune to poison. Three times per day, you can charge a dose of poison by spitting into it as a swift action. This allows the poison to affect undead and outsiders, bypassing their inherent immunities. Magical effects that negate poisons still apply.

Benefit(s): As your power grows so are you able to access the spells once cast by your ancestors. At 1st level and every six levels thereafter (7th, 13th, and 19th level), add one spell from any arcane spellcasting class to your class spell list. The spell must be one level lower than the highest spell level you can cast. For example, a 6th-level wizard may choose any arcane spell up to 2nd level.