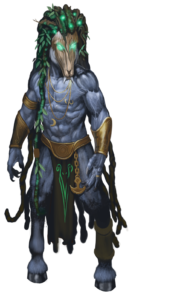 Envoys are the rare creation of the rulers of the fey realms but are orphans from the moment they’re discovered. Their births are cloaked in mystery. None know how or when an envoy is born, only that they appear under unusual circumstances. They may be discovered at any stage of their lives, too.

After a bountiful spring, an infant wreathed in flowers may be found floating down the calm waters of a river. An adult envoy may wander into a city with no knowledge of who they are, except that they have a pressing need to speak with a newly voted in and beloved mayor. Or a toddler may be found playing in the roots of an ancient tree as it bears fruit for the first time in a century.

Envoys are rare, but their reputations are great: Each is born for a divine purpose, whether for good or evil. Their fates are woven by the gods themselves to affect the world in a way only a mortal can. This reputation means that when they are discovered, word spreads quickly.

Envoys lead and serve others, whether by nature or by the expectations set by their miraculous birth. However, what an envoy’s destiny entails is anyone’s guess. Unless their purpose becomes clear to them at a young age, envoys leave home at maturity in search of it.

Some envoys are proactive in their search for purpose, such as by climbing the ranks of the city guard, working under the servitude of a dryad, or by practicing a faith. Others shy away from their destiny altogether, moving to remote places in an attempt to escape it. They quickly learn that destiny is not easily avoided.

Envoys are hardy. They can be stoic and humorless, believing that only when the workday is done can they relax. Yet they enjoy the company of others and in inspiring others to a cause.

During their leisure time, envoys turn to simple pleasures, such as reading, gardening, or sculpting. Poorer creatures of this race memorize epics or take on additional work in order to support others they care for.

Envoys are thoughtful and forthright. They take pride in leaving their mark on others. They represent the foundation on which a people, organization, or small cut of the world can flourish. And they graciously carry that burden.

Envoys grow to be between 7 and 8 feet tall and have lithe figures. They have long faces like a stag and slanted eyes. Their hair grows out like branches, and they have bronze, silver, or golden skin. Envoys have short hair along their bodies, from their feet up to their slender necks and over their jawbones. This hair grows in hues of red, brown, white, black, green, or blue. Though they may appear regal, envoys are tough, able to toil away at work for long hours. An envoy reaches adulthood at 20 years and lives up to 200 years.

Envoys are rare but are found throughout the fey realms. They are most common during times of strife, such as when the gods clash or when a being has disturbed the natural order of things or created an imbalance between good and evil.

They emphasize community and religious service. Those who can read are inclined to teach scripture. Although envoys cannot have children, they commonly adopt and stress the importance of a vocation.

They believe in fairness and in bringing others together for a common cause. To their dismay, envoys may be worshipped by communities or paraded around. Envoys practice humility and are mindful of their mortality. To them, their primary purpose is to show how the common man can aspire to affect the world and rise to greatness.

Envoys take on an inordinate burden at every turn, believing it their duty to serve others. This may drive them to put their wellbeing second by jumping in the way of danger in order to protect others. Or it could mean that they till the fields long after supper.

Living simply comes naturally to them. Few believe that the accumulation of fanciful things, such as fine art or ornate dishware, will serve them when destiny finds them, and they teach others to share whenever they come upon windfall.

Those who live in the wild turn to nature and may treat animals and plantlife as their people, and work to maintain the natural world’s delicate balance. Others may choose to go on pilgrimages at maturity in hopes of discovering their divine purpose.

Envoys believe that their fates are predetermined, that the gods have shaped their lives as they shape the planes. This notion allows them to be more accepting of death — if they were to die, then surely that would mean that they have accomplished what they were created to do.

Envoys forge relationships with those who respect or abide by their convictions. They have little patience for those who look down on the common people or who put themselves first.

Yet those who adventure with envoys may frown at their tendency to put themselves in harm’s way or take on work that may slow down the group. For an envoy, however, each quest they undertake has value, believing that one good deed deserves another.

Envoys prefer companions who are reliable, thoughtful, and hardworking. They butt heads with those who squander away their free time. As a rare people of divine birth, they understand how a people’s preconceptions can lead to turmoil.

Not all envoys are good, however. Those who are born to do evil are aware that their actions will draw the ire of others. They may seek companions who can help them plan or set up contingencies.

They can be thoughtful in their evilness and use their race’s reputation to divert others from seeing their true intentions.

Envoys can be any alignment. Though most arrive at the conclusion that they have no free will, they respond differently to the thought. An envoy who is true neutral, for example, trusts his gut and believes that he will accomplish whatever he was made for. One who is lawful good may do what is within his power to positively influence the world, and one who is chaotic good may believe his life’s purpose outweighs the need to follow the law.

Just as the rulers of the fey realms may be evil, so can envoys.

Those who fall on this end of the spectrum believe that evil is necessary, especially in times of peace. They think that people can only overcome their differences if they have a common enemy.

Others are drawn to power and are driven to rule others no matter the costs. These envoys are ruthless and use their reputation to turn others toward evil.

Envoys are frequent travelers, often leaving their homes at maturity in order to embark on a personal or spiritual journey.

Envoys who find a home in nature become stern protectors of it and are either blessed with its gifts or learn to survive by observing its creatures. Others join the local guard or other organization in the hopes of finding a purpose that resonates with them. Those who do are often called on by the church or their faith to be divine protectors.

Envoys are raised in a variety of cultures across the fey realms.

They have no naming conventions of their own but are often named after gods.

Envoys are keystones in their communities and the natural world.

They have unnatural physical and mental fortitude, allowing them to endure many hardships.

The following feats are available to a character of this race who meets the listed prerequisites.

Benefit(s): You spent your early years jumping from one trade to another and have found that you have a talent for picking up new jobs and filling different roles. When you select this feat, choose any two classes. You may not select your favored class. When you level up in either of these classes, you may choose to receive +1 hit point or +1 skill rank. You may select prestige classes.

Benefit(s): You have practiced and perfected the art of scrying, extending the range of your spells and making them harder to detect. Treat your caster level as 3 higher for the purposes of: