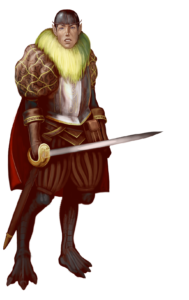 When the gods created the birds of paradise for the Material Plane, they used the alluri for inspiration. But even a flock of birds of paradise couldn’t stand out from the enthralling personality and plume of an alluri.

But that’s for good reason: As they mature, each alluri grows a unique and colorful plume at the neck. Alluri can control their feathery decor, allowing them to draw attention to themselves with a flourish, much like how a bird of paradise might when courting another.

Alluri are most at ease when surrounded by others. From the bustle of a nobleman’s ball to the rowdiness of a tavern frequented by pirates, alluri can find friends and entertainment wherever they go. While some adventurers might find them to be garrulous, alluri know the value of networking and gossip.

But alluri aren’t just good company at parties. They love a good story. For that reason, they’re often in the mood for an adventure, or at least helping adventurers in exchange for a tale or a juicy bite of gossip.

No doubt, some alluri become pirates or sell secrets to the highest bidder. They may do so not because they’re instinctively driven to harm others but because it all makes for a good tale.

Daring, charming, and at home among others, an alluri’s greatest weakness is the boredom that comes with solitude and the mundane. Alluri live to speak and be heard, to dress up and be seen. Without an audience, they’re bound to wander in search of one — or at least an adventure worth telling.

Alluri stand between four and six feet tall. They’re often either tall and slim or short and stout. Their skin tone is dull and comes in grays, yellows, and browns. However, they have feathered and colorful eyelashes that grow up to four inches in length.

Most notably, alluri grow a unique plume of vibrant colors at maturity. These feathers grow on their collarbone, and alluri pick their outfits to accentuate this as a centerpiece. Alluri can control their plumes. They can furrow their feathers when distressed or make them stand up like an elaborate collar when excited, for example.

As an alluri’s plumage makes them memorable and easy to spot, lawless alluri hide their feathery attire under heavy clothing or dye it a dull color.

They have small mouths and sharp eyes.

Alluri stand with poise, always ready for a performance, whether on stage or in battle. They reach maturity at 12 years and can live up to 70 years.

Alluri are found in major cities throughout the fey realms. They value fame, riches, and are typically vain.

However, they care dearly for the many friends they make over their lives. In fact, they take pride in the accomplishments of those they cherish and may use their contacts to help them. In return, however, they expect to be publicly thanked for their help.

Alluri often host parties and love to fill their homes with unique and flamboyant things. They spend gold as quickly as they make it. Their dress is as colorful as their personalities. In fact, richer alluri pay for custom and gaudy attire to flaunt at gatherings.

Alluri come from close-knit and large families. However, siblings compete with one another for the spotlight. They inspire each other to make the most gold or ascend to a position of power.

As natural storytellers, alluri frequent social events, the theatre, and local taverns. For coin, alluri are natural salesmen and artists of all disciplines. They prefer being in the middle of the action, and thus can be found in the busiest marketplaces shouting over others.

Even poor alluri aspire to be admired, whether by growing the largest vegetable in town or by crafting garments for the mayor’s daughter. These ambitions may, at times, lead them into trouble.

Lawless alluri, for example, are drawn to the thrill of buying and selling on the black market and espionage.

Alluri are entertaining and easy to get along with but are self-obsessed.

At times, they forget to share credit after accomplishing a feat. But they do not do this out of ill will.

As they’re willing to jump into dangerous situations and are confident even among foes, alluri make great companions.

They improvise well, make friends easily, and are accomplished networkers.

Alluri aspire to achieve great things — or at least make a fair amount of gold. Thus, those who adventure with alluri find themselves regaled with stories and their pockets fuller.

As a social people, alluri seek out parties and other social gatherings.

In new towns or cities they will seek to make themselves known and admired, whether by starting a drinking contest or putting on a performance. Thus, they butt heads with adventurers who’d rather remain hidden and unknown.

Alluri are chaotic. Their self-obsession leads them to put their interests before others. Their impulsive nature means they fail to think through their decisions and overlook the laws of the land.

Alluri who worship lean toward gods they believe would benefit them best. They turn to gods who represent charm, luck, and trickery.

Alluri are frequent adventurers, whether traveling for pleasure, coin, or a story to tell.

Some take to the open road to chronicle their adventures or draw the affection of others by playing their music or sharing similar talents. Other alluri enjoy the dance of fighting on the battlefield, and as such use their limber forms to combat enemies who stand between them and treasure. Even more find that secrets, rumors, and the occasional break-in are another way to make a living.

Alluri aren’t above being servants, but they do struggle to know their place. Alluri can be patient if they know they’ll one day be held in the same regard as their masters.

Richer alluri who grow in metropolitans grow bored of the same snobbish parties week after week, and thus choose to hire adventurers to escort them into areas of danger. However, these alluri quickly find that even the most accomplished heroes see their fair share of boredom.

Alluri are at home in social circles, but they’re light on their feet, too, and make for talented combatants.

The following feats are available to a character of this race who meets any listed prerequisites.

Benefit(s): You can end your bardic performance with a captivating flourish that dazes enemies. On your turn, as a full-round action, you may end your bardic performance with an enrapturing display of your plumage. Enemies within 30 feet who can see and hear your finale must make a Will save equal to 10 + 1/2 your bard level + your Charisma modifier. An enemy who fails its Will save is dazed for 1 round. This is a mind-affecting effect.

After using this ability, you are staggered for 1 round, even if you could not normally be staggered.

Benefit(s): You have a remarkable talent for assessing situations, allowing you to avoid getting jumped. You can always act in a surprise round even if you do not notice your enemies.