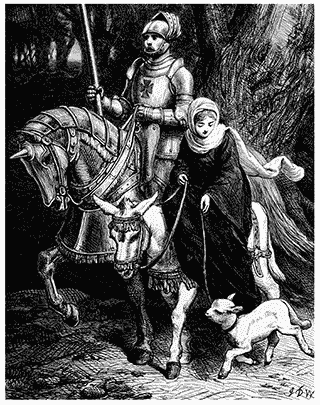 While many warriors strive to perfect their art, spending all of their time honing their skill at martial arms, others spend as much effort dedicating themselves to a cause. These warriors, known as cavaliers, swear themselves to a purpose, serving it above all else. Cavaliers are skilled at fighting from horseback, and are often found charging across a battlefield, with the symbol of their order trailing on a long, fluttering banner. The cavalier’s true power comes from the conviction of his ideals, the oaths that he swears, and the challenges he makes.

Role: Cavaliers tend to marshal forces on the battlefield, using their mounted talents and challenges to control the flow of the fight. Outside of battle, cavaliers can be found advancing their cause through diplomacy and, if needed, subterfuge. The cavalier is no stranger to courtly intrigue and can hold his own in even the most delicate of social situations.

The following are the class features of the cavalier.

Cavaliers are proficient with all simple and martial weapons, with all types of armor (heavy, light, and medium) and with shields (except tower shields).

Once per day, a cavalier can challenge a foe to combat. As a swift action, the cavalier chooses one target within sight to challenge. The cavalier’s melee attacks deal extra damage whenever the attacks are made against the target of his challenge. This extra damage is equal to the cavalier’s level. The cavalier can use this ability once per day at 1st level, plus one additional time per day for every three levels beyond 1st, to a maximum of seven times per day at 19th level.

Challenging a foe requires much of the cavalier’s concentration. The cavalier takes a –2 penalty to his Armor Class, except against attacks made by the target of his challenge.

The challenge remains in effect until the target is dead or unconscious or until the combat ends. Each cavalier’s challenge also includes another effect which is listed in the section describing the cavalier’s order.

Do animal companion levels from the druid class stack with cavalier mount levels?

For example, if you are Medium druid and you choose a horse companion, levels in cavalier stack to determine the horse’s abilities. If you are a Medium druid and you choose a bird companion, levels in cavalier do not stack to determine the bird’s abilities, and you must choose a second creature to be your mount (or abandon the bird and select an animal companion you can use as a mount).

(Note that the design team discourages players from having more than one companion creature at a time, as those creatures tend to be much weaker than a single creature affected by these stacking rules, and add to the bookkeeping for playing that character.)

A cavalier gains the service of a loyal and trusty steed to carry him into battle. This mount functions as a druid’s animal companion, using the cavalier’s level as his effective druid level. The creature must be one that he is capable of riding and is suitable as a mount.

The augmented companion, bodyguard, bully, daredevil, draconic, racer, and wrecker companion archetypes are all particularly appropriate for a cavalier’s mount.

A cavalier does not take an armor check penalty on Ride checks while riding his mount. The mount is always considered combat trained and begins play with Light Armor Proficiency as a bonus feat. A cavalier’s mount does not gain the share spells special ability.

A cavalier’s bond with his mount is strong, with the pair learning to anticipate each other’s moods and moves. Should a cavalier’s mount die, the cavalier may find another mount to serve him after 1 week of mourning. This new mount does not gain the link, evasion, devotion, or improved evasion special abilities until the next time the cavalier gains a level.

Consult your GM if the folllowing feats are allowed:

Consult your GM if the folllowing animal companion archetypes are allowed:

At 1st level, a cavalier must pledge himself to a specific order. The order grants the cavalier a number of bonuses, class skills, and special abilities. In addition, each order includes a number of edicts that the cavalier must follow. If he violates any of these edicts, he loses the benefits from his order’s challenge ability for 24 hours. The violation of an edict is subject to GM interpretation. A cavalier cannot change his order without undertaking a lengthy process to dedicate himself to a new cause. When this choice is made, he immediately loses all of the benefits from his old order. He must then follow the edicts of his new order for one entire level without gaining any benefits from that order. Once accomplished, he gains all of the bonuses from his new order. Note that the names of these orders might vary depending upon the campaign setting or GM’s preference.

The following orders can be chosen by both cavaliers and samurai.

Members of these orders are not necessarily bound together, but some organizations do exist that are comprised of cavaliers that all belong to one specific order.

At 1st level, a cavalier receives a teamwork feat as a bonus feat. He must meet the prerequisites for this feat. As a standard action, the cavalier can grant this feat to all allies within 30 feet who can see and hear him. Allies retain the use of this bonus feat for 3 rounds plus 1 round for every two levels the cavalier possesses. Allies do not need to meet the prerequisites of these bonus feats. The cavalier can use this ability once per day at 1st level, plus one additional time per day at 5th level and for every 5 levels thereafter.

At 4th level, a cavalier learns to train mounts with speed and unsurpassed expertise. The cavalier receives a bonus equal to 1/2 his cavalier level whenever he uses Handle Animal on an animal that serves as a mount. In addition, he can reduce the time needed to teach a mount a new trick or train a mount for a general purpose to 1 day per 1 week required by increasing the DC by +5. He can also train more than one mount at once, although each mount after the first adds +2 to the DC.

At 5th level, a cavalier’s banner becomes a symbol of inspiration to his allies and companions. As long as the cavalier’s banner is clearly visible, all allies within 60 feet receive a +2 morale bonus on saving throws against fear and a +1 morale bonus on attack rolls made as part of a charge. At 10th level, and every five levels thereafter, these bonuses increase by +1. The banner must be at least Small or larger and must be carried or displayed by the cavalier or his mount to function.

At 6th level, and at every six levels thereafter, a cavalier gains a bonus feat in addition to those gained from normal advancement. These bonus feats must be selected from those listed as combat feats. The cavalier must meet the prerequisites of these bonus feats.

At 11th level, a cavalier learns to make devastating charge attacks while mounted. Double the threat range of any weapons wielded during a charge while mounted. This increase does not stack with other effects that increase the threat range of the weapon. In addition, the cavalier can make a free bull rush, disarm, sunder, or trip combat maneuver if his charge attack is successful. This free combat maneuver does not provoke an attack of opportunity.

At 12th level, whenever a cavalier declares a challenge, his target must pay attention to the threat he poses. As long as the target is within the threatened area of the cavalier, it takes a –2 penalty to its AC from attacks made by anyone other than the cavalier.

At 14th level, the cavalier’s banner becomes a rallying call to his allies. All allies within 60 feet receive a +2 morale bonus on saving throws against charm and compulsion spells and effects. In addition, while his banner is displayed, the cavalier can spend a standard action to wave the banner through the air, granting all allies within 60 feet an additional saving throw against any one spell or effect that is targeting them. This save is made at the original DC. Spells and effects that do not allow saving throws are unaffected by this ability. An ally cannot benefit from this ability more than once per day.

At 20th level, the cavalier is a maestro of the battlefield, commanding and moving troops like so many game pieces. The cavalier gains a bonus teamwork feat, can grant up to three bonus feats with tactician, and increases the range of tactician by 90 feet.

The following are cavalier archetypes. Unless stated otherwise, cavaliers of any order can take these archetypes.