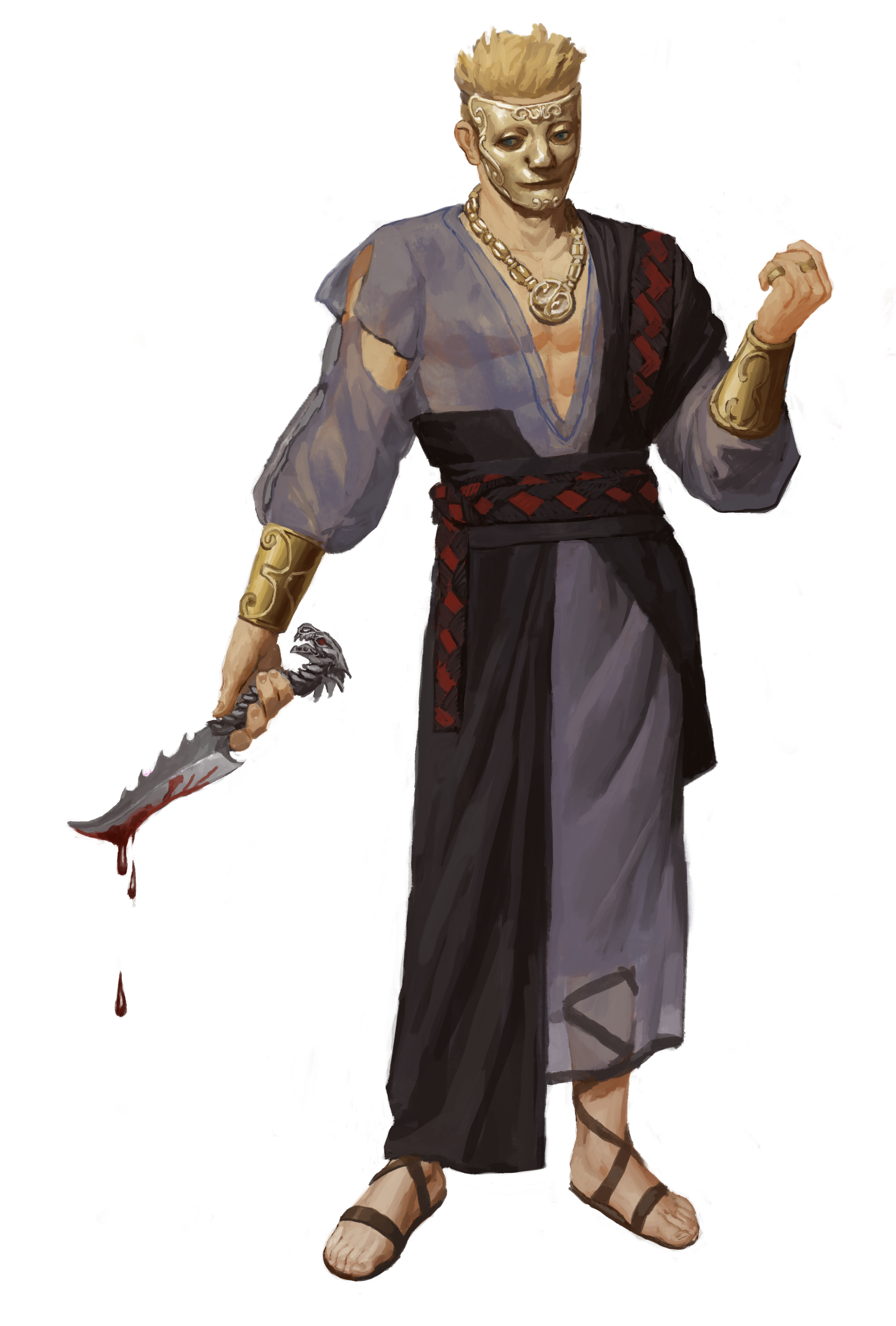 You don’t believe in my god? That’s okay, he believes in you.

Not all religions are welcomed in the eyes of the public. Some must be practiced in secret, away from prying eyes and open churches. Members of these hidden conclaves are known as cultists, and their faiths and rituals are as numerous as they are enigmatic.

Whatever cultists might venerate, be it a long-dead or abandoned god, a collection of monsters, natural disasters, or some other phenomenon or ideology, their beliefs yield divine magic nearly as strong as that of the clerics who practice their religion where all can see. That cultist magic is so strong is a mystery, and it troubles traditional clerics because it calls into question their own devotion. Conversely, cultists see their gifts as rewards for holding true to something that others may dismiss.

Role: Cultists are mysterious spellcasters who use magic to confound and confuse enemies. As they learn more secrets they can manipulate the minds and perceptions of those who would denounce their faith. Cultist are rightfully feared by other religious followers as they can magically manipulate entire groups of creatures without anyone ever knowing.

Note: The cultist is an alternate class for the cleric core class.

All of the following are class features of the cultist.

A cultist casts divine spells drawn from the cleric spell list. A cultist must choose and prepare his spells in advance.

Like other spellcasters, a cultist can cast only a certain number of spells of each spell level per day. His base daily spell allotment is given on Table: Cultist. In addition, he receives bonus spells per day if he has a high Charisma score.

Cultists meditate or pray for their spells. Each cultist must choose a time at which he must spend 1 hour each day in quiet contemplation or supplication to regain his daily allotment of spells. Time spent resting has no effect on whether a cultist can prepare spells. A cultist may prepare and cast any spell on the cultist spell list, provided that he can cast spells of that level, but he must choose which spells to prepare during his daily meditation.

Orisons: At 1st level, a cultist learns a number of orisons, or 0-level cleric spells, equal to his Charisma modifier. These spells are cast like any other spell, but they do not consume any slots and may be used again.

A cultist’s faith dictates some of the spells and abilities he gains, referred to as a domain. Each cultist gains one domain or subdomain of his choice at 1st level. This domain must represent his faith. If he worships a god, the cultist can choose from that deity’s domains or subdomains. The cultist gains the powers granted by his domain as a cleric of his level. He also adds that domain’s 1st through 6th-level spells to his spell list as he gains access to spells of those levels.

Spontaneous Casting: A cultist can channel stored spell energy into a domain spell that he did not prepare ahead of time. The cultist can “lose” any prepared spell that is not an orison in order to cast any of his domain spells of the same spell level or lower.

At 1st level, a cultist chooses up to 3 Knowledge skills (or 2 and Linguistics) and adds them to his list of class skills.

A cultist adds half his cultist level on Bluff and Disguise checks when lying about or hiding his faith, as well as on Sense Motive checks made when others doubt or disbelieve him.

When preparing spells or as part of a special, one minute ritual, a cultist can make an offering to garner additional power from his faith. The cultist can do this once per day at 1st level plus 1 additional time per day at 4th level and every 3 levels thereafter, to a maximum of 7 times per day at 19th level. He can make as many offerings in one sitting as he chooses.

An offering takes the form of a sacrifice, either of goods worth half the cost of a scroll with a spell level the cultist could cast if he were a cleric, or one or more helpless creatures that are killed as part of the process. Once the offering is made, it is destroyed. A creature sacrificed in this way cannot be raised without the aid of powerful magic, such as a wish or miracle.
After making an offering, the cultist gains a boon from his faith. At any time within the next 24 hours, the GM can choose a spell from any spell list to cast for the cultist as a free action. This spell’s level can be less than or equal to a scroll worth the value of the sacrificed goods, or half the total hit dice of the sacrificed creature(s). Regardless of its level, the spell is cast using the cultist’s level and Charisma modifier for any calculated values (DC, range, duration, and damage, for example).

While at least one boon remains, a cultist can attempt to direct its benefit (choosing the spell to cast) as a standard action with an appropriate Knowledge check (usually religion, but a cultist that reveres an ideal or creatures of a particular type may use something more appropriate). The Difficulty Class for this check begins at 20 + the spell level of the boon and increases by +2 each time the cultist is successful. If the cultist fails to direct his boon, he loses his action, but can attempt to do so again on the following round. Failure by 5 or more means the cultist has pushed his faith too hard and cannot attempt to direct it again until the next day. If he succeeds by 5 or more, the cultist earns a favor, gaining his benefit without expending the boon of his original offering.

A cultist’s devotion to his faith protects him from effects that would alter his thinking. At 2nd level, he gains a bonus equal to his Charisma bonus (if any) on all saves against mind-affecting effects. This bonus increases by +1 at 5th level and every 4 levels thereafter, to a maximum of +4 at 20th level.

At 2nd level, a cultist adds half his cultist level to all Intelligence, Wisdom, and Charisma-based skill checks when trying to gain influence with a non-player character, participating in a heist or infiltration, chasing down prey in a chase or a pursuit, or performing research to learn.

Those who have crossed paths with cults or been used by them often find them oddly beautiful and secretly wish to see the cult again. At 2nd level, and every even level thereafter, a cultist chooses one cleric spell he can prepare with a duration greater than instantaneous. When the cultist prepares and casts the chosen spell, creatures hit by that spell, or that fail their saving throws against the spell, must make an additional Will save against the spell’s DC. Failure indicates that the creature gains a minor addiction to the spell.

Beginning at 8th level, instead of choosing a new spell to cast with enchanting euphoria, a cultist can increase the addiction affect of a spell he already chose. When a creature affected by that spell fails its save against addiction, the effect is now a moderate addiction. Beginning at 14th level, the cultist can choose one of his spells a third time, increasing the addiction effect to a severe addiction.

At 3rd level, a cultist becomes a master of spreading lies and rumors using manipulation and a network of connections. When the cultist starts a rumor, he gains a bonus equal to half his cultist level on skill checks made to spread lies about someone.

At 5th level, as a full-round action, a cultist can preach of the benefits of his faith while denouncing other religions and deities. Creatures who can hear the cultist and understand his language must make a Will save (DC 10 + half the cultist’s level + his Charisma modifier). Failure changes the target’s alignment to true neutral, which may affect its access to some spells and abilities. The effect lasts for 24 hours, but a creature can spend 1d4 minutes in contemplation to end the effect early. Whether it succeeds or fails, a creature can only be affected by one seeds of doubt effect each day. This is a mind-affecting effect.

At 9th level, as a full-round action, a cultist can fundamentally alter the alignment of a creature affected by his seeds of doubt ability. If it fails a second Will save against the same DC, the creature’s alignment changes to match the cultist’s and it sees the cultist as an ally. The creature can attempt to restore its alignment once each day. At 15th level, the duration of this effect becomes permanent, and changing the creature’s alignment back requires an atonement spell or more powerful magic.

At 11th level, a cultist can weave deception into his spellcasting. When casting a spell, the cultist may cast another spell he has prepared as a swift action (as if it were a quickened spell). This second spell must be of the enchantment school and can only target a single creature within 10 feet of the first spell’s target or area. A Perception check versus the cultist’s Sleight of Hand is needed to notice the casting of this second spell (the cultist can add his Charisma modifier in place of Dexterity to this check). The cultist can do this up to 3 times per day.

At 19th level, a cultist’s devotion to his faith makes him immune to mind-affecting effects.

At 20th level, a cultist has stumbled upon the secret of manifesting his faith’s glorious presence for a short instance. When he does, those who don’t share the cultist’s religion are filled with a mix of primal panic and spiritual awe. He gains one of the following abilities of his choice.

Aspect of Faith: Once per day, the cultist may spend two offerings of faith as a full-round action to transform into an aspect of his faith for an instant, forcing all enemies within 30 feet that can see him to make a Will save (DC 20 + the cultist’s Charisma modifier) or become overwhelmed and fall unconscious for 2d6 rounds. Those that awaken unharmed from this ability are sent into a state of confusion, questioning their faiths or beliefs. They are automatically under the effect of the cultist’s seeds of doubt ability.

Sleeper Agent: The cultist may set the seeds of fanaticism within the mind of a potential convert. When using alter ethics, if the target fails its Will save, the cultist may choose to not alter the target’s alignment and put a trigger on it instead. At any point longer than 24 hours but shorter than one year of the initial use of alter ethics, the cultist may activate the trigger, which alters the target’s alignment and casts haste, dominate monster, and eagle’s splendor on the target. The commands set for the dominate monster effect are sent telepathically between the agent and the cultist while they are on the same plane.

After the spell effects wear off the target falls unconscious for 24 hours as the strain on its body and mind hit their peak. A cultist may only have one trigger in existence at one time.