Some believe the soul to be the immortal essence of the mortal body—the seat of will, understanding, and personality. It is this very philosophy that drives the vorpal knight. By harnessing the souls of their enemies they become more powerful. Every soul they claim fills them with new knowledge, skills, and vitality. It is a sad existence however; for the more they slake their vile thirst, the emptier they become, until only a deep reservoir of darkness remains that nothing can satisfy but the souls of others. Most become unnatural beings, their own souls twisted and defiled to the point that they are no longer considered to be what they once were. 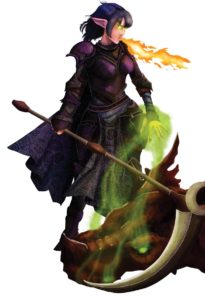 eir souls, and forging them into greater power. While each soul grants them a wide variety of options, few can match these monsters on the battle field.

The following are class features of the vorpal knight.

A vorpal knight is proficient with all simple and martial weapons and with all armor (heavy, light, and medium) and shields (including tower shields).

At 1st-level and every three levels thereafter, a vorpal knight may select a bonus feat in addition to those gained from normal advancement.

These bonus feats must be selected from those listed as combat feats, or any feat pertaining to the vorpal knight class. Vorpal Knight class feats include; Aspected Volatility, Infernal Burst, Infernal Release, Reap the Harvest, Renewing Breath, Renewing Breath (Greater), and Stoked Soul (all of these feats are described in the product “Racial Profiles Expanded: Hungry Souls” (this source of this content).

As a swift action, the vorpal knight chooses one target within sight to mark. If this target is a living creature (not a construct, mindless undead, or otherwise soulless creature), the vorpal knight adds her Charisma bonus (if any) to her attack rolls and adds her vorpal knight level to all damage rolls made against the target of her mark. Regardless of the target, mark soul attacks automatically bypass any damage reduction (DR) the creature might have.

In addition, while mark soul is in effect, the vorpal knight gains a deflection bonus equal to her Charisma modifier (if any) to her AC against attacks made by the target of the mark. If the vorpal knight targets a creature that is considered to be soulless, the mark is wasted with no effect.

Additionally, once per day, a vorpal knight may consume any soul she currently has stored in a reservoir. Doing this causes her to lose all aspects of the consumed soul, but adds a number of consumption points to her pool equal to half her vorpal knight level (minimum 1). Using this ability requires a high level of concentration, and cannot be performed in stressful situations, such as combat.

As a move action, the vorpal knight can focus on a single target and determine its HD and class levels. This functions as the assess spell, with a caster level equal to the vorpal knight’s.

Beginning at 1st level, a vorpal knight gains a +1 insight bonus to her AC for every three souls she possesses in her reservoir.

The vorpal knight begins with a single reservoir at 1st level and gains a new one every level thereafter. A reservoir is used to house a marked soul from a defeated creature, which the vorpal knight may use to gain certain feats, racial traits, and special abilities. These are referred to as aspects of the soul. Once a soul is added to an empty reservoir, the vorpal knight must choose a single aspect from the soul to apply to herself. Some aspects, like special abilities, require other aspects to function. Each type of aspect is explained in further detail later.

Starting At level 10 a vorpal knight may choose up to two aspects from any soul with 5 HD or less.

At level 15 a vorpal knight may choose up to two aspects from any soul with 10 HD or less.

At 20th level a vorpal knight becomes a master of souls, and may choose two aspects from any soul she possesses. She may also mark the soul of any creature, regardless of its HD, and gains the maximum amount of health back that she would receive from the consume soul class ability, without having to roll.

A marked soul has several traits that make up their being. A vorpal knight can draw upon these to increase her strength, defense, and even grant her special abilities. Certain aspects may only be equipped when the vorpal knight is strong enough to control it. In the same way, some aspects may only offer a partial bonus until requirements are met. For a full list, refer to Table: Aspect Restrictions.

*The vorpal knight may only have so many of a single type of aspect. Types include; damage reduction, feats, immunity, languages, natural armor, natural attacks, phylocrux, resistances, senses, skills, special attacks, speed, and spell resistance.

Damage Reduction (DR): A vorpal knight may choose one form of damage reduction if it is available. For example, if the creature has DR 10 vs cold iron or evil, she would have to choose between having DR 10 vs cold iron, or DR 10 vs evil.

Feats: A vorpal knight may choose to take any one feat possessed by the slain creature. They are still required to meet the feats prerequisites.

Languages: A vorpal knight gains every language possessed by the slain creature. This includes additional communication methods like telepathy.

Natural Armor: A vorpal knight may choose to equip a slain creature’s natural armor. This bonus does not stack with natural armor granted by spells or spell-like abilities. In such a case, the vorpal knight uses the higher armor bonus.

Natural Attacks: A vorpal knight may choose to take the aspect of any natural attack possessed by the slain creature. The damage dealt by this attack is always the same as the creature’s. For example, a barghest has a x2 claw attack that deals 1d4+4 damage, so the damage dealt would be 1d4 with any additional effects, such as grab. After acquiring a natural melee attack, it may manifest physically on the vorpal knight’s body. In the case of the barghest’s claws,the vorpal knight would gain a wicked set of sharp digits.

Phylocrux (Sp): Beginning at 2nd level a vorpal knight may gain a spell-like ability called a phylocrux when they digest a creature. The spell-like ability gained depends on the creature’s type and total combined HD, and/or class levels.

A vorpal knight may only use spell-like abilites acquired this way a number of times per day, similar to how a sorcerer or oracle casts their spells. See Table: Phylocrux Uses Per Day.

In the event an unlisted creature type is slain, ask your GM what spells might be appropriate substitutes, using the following as a general guideline, based upon the creature’s Hit Dice:

Resistances: A vorpal knight may choose one type of energy resistance if it is available. For example if the slain creature has cold and fire resistance 10, he may choose a resistance of 10 to cold or fire.

Senses: A vorpal knight can choose any of the following senses if the slain creature possessed them: all-around vision, blindsight, darkvision, lifesense, low-light vision, and scent.

Speed: A vorpal knight may choose one type of movement or speed the slain creature possessed. For example, if the creature had a movement speed of 40 feet and a fly speed of 100 feet; the vorpal knight could choose to overwrite her old base speed with the new one. Or she could choose to gain a fly speed of 100 feet. Additionally, no matter how good the slain creature’s fly maneuverability (poor, average, good, perfect), the vorpal knight may only ever have a fly maneuverability of average or lower.

Spell Resistance (SR): A vorpal knight may choose to take a creature’s spell resistance as her own if it is available. If she takes another soul with spell resistance, they do not stack, she uses the greater of the two.