There are many paths taken by spellcasters. Some devote their lives to studying esoteric tomes and rituals, others beseech or are chosen by greater powers, and still others are born with magic in their very being, and need only let it out. There are, however, some very few for whom magic is not a task to be studied, nor a gift to be channeled. For them, magic is something palpable and intuitive, something to simply be grasped and shaped. These intuitive molders of arcana, are called mystic savants.

This unique perspective on the magical arts can act as both boon and bane for these gifted few. While boundaries between the arcane and the divine do not exist for these practitioners, the living, breathing nature of spells in their eyes results in a tremendous difficulty in pinning down and retaining them. Instead, they find their niche taking hold of the spells of others, to redirect, or consume. 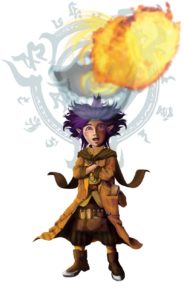 Role: With their great range of possible spells, mystic savants are most useful when they can use their flexibility to fill strategic gaps in a party, or when they can put their suite of counterspelling abilities to use against another dedicated caster. Without other casters around, they can instead use their abilities to craft, identify, and utilize magic items.

All of the following are class features of the mystic savant.

Mystic Savants are proficient with all simple weapons. They are not proficient with any type of armour or shield. Armour can interfere with a mystic savant’s gestures, which can cause their spells with somatic components to fail (see Arcane Spells and Armour)

Mystic Savants prepare their spells in a manner unlike any other class. The primary means for spell preparation involves copying a spell cast by another spellcaster. Any time a mystic savant successfully identifies a spell being cast, using the Spellcraft skill, they may immediately prepare the identified spell into any available, unprepared spell slot of the appropriate level or higher. This preparation is done as a free action

Like other spellcasters, a mystic savant can cast only a certain number of each spell level per day. In addition, they receive bonus spells per day if they have a high Charisma score (see Table: Ability Modifiers and Bonus Spells).

A mystic savant knows a number of simple spell-like abilities, known as knacks. They know a number of knacks equal to their Charisma modifier. These abilities mimic 0-level spells, and may be used at will. Knacks may be chosen from the following list: acid splash, bleed, create water, detect poison, jolt, light, mage hand, mending, message, prestidigitation, purify food and drink, resistance, stabilize, virtue.

All mystic savants begin play possessing a special token. This token may take the form of a lens, a small mirror, or any other similar small object that can show reflections, or be looked through. These seeing tokens act as a focus for mystic savants, providing them with the benefits of the Eschew Materials feat, as well as acting as their divine focus. A seeing token has a faint magical aura, but is otherwise a mundane object. If the mystic savant’s token is lost or destroyed, they may attune themselves to a new object, by finding an item of the appropriate type and carrying it on their person for 24 hours. A mystic savant may only have one seeing token attuned to them at a time.

In addition to acting as a focus for their spells, a mystic savant may use their Seeing Token to grant them the effects of detect magic and read magic at will.

To a mystic savant, magic is a tangible thing, something to grasp and even consume. The mystic savant may choose to eat a spell, the effect of which is similar to using counterspell, wherein the mystic savant must select an opponent as the target. They do this by choosing to ready an action. In doing so, they elect to wait to complete their action until their opponent tries to cast a spell. The mystic savant may still move at their normal speed, since ready is a standard action.

A mystic savant must be able to present their seeing token to use this ability.

Beginning at 2nd level a mystic savant develops a special affinity for magic items. A mystic savant using a wand may use their caster level in place of the wand’s level. Additionally, for the purposes of using or creating magic items, the mystic savant is automatically considered to have the appropriate spells on their class spell list.

Starting at 3rd level a mystic savant gains a 10 ft. consuming aura. Any spell cast by another caster within this aura allows the mystic savant to use their spell eating ability as an attack of opportunity, so long as they haven’t used up their attack of opportunity (see feat Arcane Reflexes), and still have charges available for their spell eating ability.

At 3rd level, the mystic savant can select from the following initial abstracts.

At 6th level, a mystic savant adds the following options to the list of those that can be selected.

At 9th level, a mystic savant adds the following options to the list of those that can be selected.

At 12th level, a mystic savant adds the following options to the list of those that can be selected.

* Indicates that the mystic savant must select the spell theft abstract before selecting this ability.

These abilities are selected at 3rd level and every three levels thereafter. Once an abstract synthesis is chosen, it can’t be changed.

Beginning at 4th level, a mystic savant gains additional insight into consumable magic items. Upon successfully identifying the spells contained in a potion, scroll, or spell trigger item, the mystic savant may prepare or echo those spells as if they saw them being cast, making a Spellcraft check (DC 15 + the spell’s level) as normal. Additionally, by making the appropriate check and drinking a potion, completing a scroll, or consuming a charge from a wand or staff, the mystic savant may prepare the contained spell in an expended spell slot of the appropriate level or higher.

At 6th level, and every four levels thereafter, a mystic savant gains a bonus feat in addition to those gained from normal advancement. These bonus feats must be selected from those listed as metamagic feats. They must meet the prerequisites for these feats as normal.

Beginning at 7th level, a mystic savant gains the ability to recognise the inner workings of spell-like abilities. When a creature uses a spell-like ability, the mystic savant may attempt to identify it with a Spellcraft check (DC 15 + the spell’s level), and may prepare or echo them as if they were a normal spell. Additionally, they may use their spell eating ability to nullify such abilities as they would any other normal spell.

Although the mystic savant is considered to have access to all spells, the list below represents spells they may spontaneously prepare as if they were echoed.