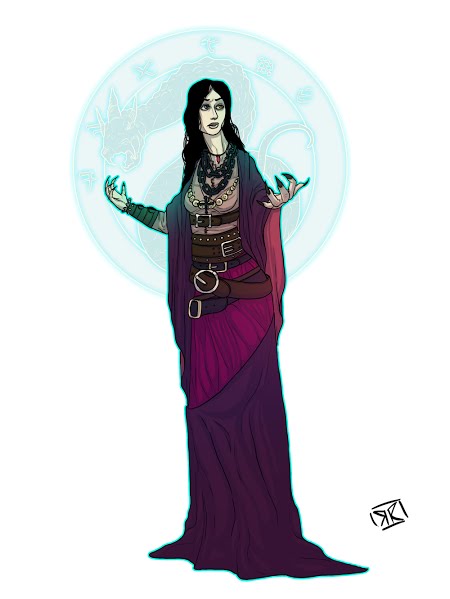 The desire and skill to heal comes naturally to hedge witches of the healer tradition. They are equipped with spells, potions and herbs to aid the ill and injured. Many work as midwives, or run herbalist shops.

Familiar Types: A hedge witch who follows the healer tradition can choose a hawk, lizard or rabbit as her familiar.

Circle Power: Healing Circle – Whenever you are within a circle you have cast, all spells you cast which heal hit point damage are treated as if modified by the Maximize Spell feat. Healing spells with a range of touch require the person to be healed to also be within the circle. The hedge witch cannot reach out of the circle to heal without breaking the circle. Healing spells that have a range or an area of affect do not require the targets to also be within the circle.

If the circle’s duration will expire before another rite can be completed, the hedge witch must break her current circle and cast a new one.

At 5th level, the healer hedge witch learns the rite of potion brewing. With this rite, the hedge witch can create truly potent potions for healing wounds.

The hedge witch first casts her circle, and then she takes her place in the center with her cauldron and ingredients.

She adds special ingredients to the cauldron worth at least 10 gp and chants softly for 15 minutes. After the 15 minutes, the hedge witch then proceeds to brew her potion as normal (as described in the Brew Potion feat.) The hedge witch must still meet all perquisites for the potion she is brewing (cost, spells, etc.) and make any necessary skill checks. The rite is performed prior to beginning the brewing, so even if her circle expires before the potion is completed, the effects of the rite still apply.

Any healing potions the hedge witch then brews after performing the rite of potion brewing are maximized in effect, based on the spell the potion emulates. The rite only applies to potions that heal hit point damage, such as cure light wounds, cure moderate wounds, or cure serious wounds.

Heal Thy Self (Su)

At 9th level, the healer learns the heal thy self rite, which allows the hedge witch to heal herself of wounds and many debilitating conditions.

The hedge witch must first cast her circle, then she sits in the center of the circle and chants softly for 30 minutes.

At the end of the rite, the power washes over her, removing ability damage and the following conditions: blinded, confused, dazed, dazzled, deafened, diseased, exhausted, fatigued, nauseated, poisoned, sickened, and stunned. It also cures 100 hit points of damage (up to the hedge witch’s normal maximum).

At 13th level, the hedge witch learns the heal the soul rite. With this rite, the hedge witch can remove various mind-affecting conditions from any number of people within her circle with her.

The hedge witch begins by casting her circle, with all of those she wishes to heal remaining in the center of the circle.

The hedge witch then sits in the center of the circle and chants softly for 45 minutes, calling on the power of the earth and spirits to ease the troubles of those in her care. At the end of the rite, everyone in the circle (including the hedge witch) has the following conditions removed: confused, cowering, dazed, fascinated, frightened, panicked, and shaken. In addition, the power of the rite instantly ends the effects of spells such as confusion, crushing despair, feeblemind, insanity, touch of idiocy, and other similar spells, at the GM’s discretion.

At 17th level, the hedge witch learns the resurrection rite, with which she can restore to life more than one person or creature.

In all other respects, this rite functions similarly to the spell resurrection.

At 20th level, the healer learns the healing moon rite, which makes many of her healing spells more powerful and grants her more skill in natural healing methods.

The hedge witch casts her circle to begin the rite, then sits in the center of the circle as she recites the proper incantations and prayers and draws mystic symbols with her athame. The rite takes 2 hours to complete, but at the end of that time the hedge witch gains a +10 divine bonus to all Heal checks for the next month. Also, all healing spells of 4th level or lower that the hedge witch casts over the next month are treated as if affected by the Maximize Spell feat. This affects only spells that restore hit point damage, not spells that restore ability damage or negative levels.

The healing moon rite can only be performed once per month, and must be performed under a last quarter moon. If it is performed at any other time of the month, the rite does not work.