This magnificient horse has great bird-like wings upon its back and moves with a quiet and proud grace. 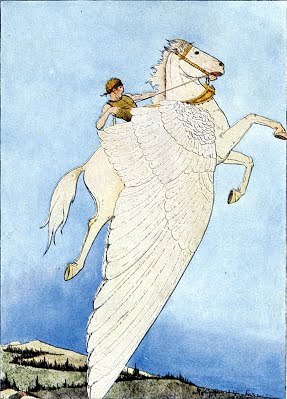 The pegasus is a magnificent winged horse that sometimes serves the cause of good. Though highly prized as aerial steeds, pegasi are wild and shy creatures not easily befriended. A typical pegasus stands 6 feet high at the shoulder, weighs 1,500 pounds, and has a wingspan of 20 feet. Most pegasi are white, though occasionally one is hatched with conventional horse colors and markings.

The pegasus is, despite its appearance, as intelligent as a human. As such, those who try to train a pegasus to serve as a mount find the pegasus to be recalcitrant and even violent. A pegasus cannot speak, but it understands Common and greatly prefers the company of a good companion. The proper method to convince a pegasus to serve as a mount is to befriend it with diplomacy, favors, and good deeds. A pegasus is generally indifferent to a good-aligned creature, unfriendly to a neutral one, and hostile to an evil one—before a pegasus will serve as a mount, a pegasus must be made helpful via Diplomacy checks or other means. Riding a pegasus requires an exotic saddle or no saddle at all, as a regular saddle’s straps interfere with the creature’s wings. A pegasus can fight while carrying a rider, but the rider cannot also attack unless he or she succeeds on a Ride check. Trained pegasi are not afraid of combat, and the rider does not need to make a Ride check each round merely to control his mount.

Pegasi lay eggs—they are worth 2,000 gp each on the open market, while young are worth 3,000 gp per head. However, as they are intelligent, good-aligned creatures, selling eggs and young is essentially slavery and is looked down on or outlawed in good societies.

Pegasi mature at the same rate as horses. Professional trainers charge 1,000 gp to rear or train a pegasus, which serves a good or neutral master with absolute faithfulness for life.

In some pegasi, the blood of a mighty heroic stallion ancestor runs strong. These champions have the lifespan of a human, the advanced template, perfect flight maneuverability, fire resistance 10, a +4 racial bonus on saving throws against poison, and an immunity to petrification attacks. Some are able to speak a few words in Common or Celestial. They are fully aware of their superiority over common horses and pegasi, and need no training to fly with a rider, but only allow themselves to be ridden by great heroes.