With draconic scales covering much of its body, this staglike creature moves with awe-inspiring grace.

A kirin casts spells as a 6th-level sorcerer, and can cast spells from the cleric list as well as those normally available to a sorcerer. Cleric spells are considered arcane spells for a kirin, meaning that the creature does not need a divine focus to cast them. 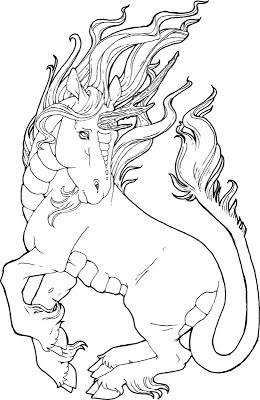 Emperor Kirin: The wisest and most powerful kirin are known as emperor kirin, having earned this title through the respect of their peers and the strength of their powers. They resemble standard kirin, except their hooves give off sparks as they gallop through the air.

The noble kirin roam the sky, their feet rarely touching soil. They have a stag’s graceful body and cloven hooves, a pair of backward-facing horns, and a thick mane and tail ranging from golden to brilliant reds or purples in the hues of the setting sun. Their hide resembles that of a dragon, the scales gleaming ebon or iridescent green.

Rare in the extreme, kirin seldom meddle openly in worldly affairs, preferring a subtle hand in overturning the schemes of wicked spirits such as hags and oni. The blood of young kirin runs hot, however, and such spirited youths may serve as mounts for cavaliers and paladins of clever wit and untarnished moral quality.