This tiny creature resembles a cross between a lizard and a long-eared cat. From its head juts a mesmerizing, bright red gemstone.

Carbuncles possess a crude form of telepathy, allowing them to transmit mild impressions and remembered sensations to other creatures. This form of telepathy cannot convey language or hinder a target in any way (such as by transmitting pain). Thus, a carbuncle can relate a feeling of fear or the faint smell ofleaves, but cannot directly warn an ally of a monster or tell of a treasure under a dirt mound.

As an immediate action twice per day, when struck by an attack that would reduce it to 0 hit points or fewer, a carbuncle can teleport as per the spell dimension door, but only within a range of 30 feet. Upon teleporting, the carbuncle leaves behind a perfect replica of itself amid a colored flash and the sound of a reptilian choke. This replica duplicates the carbuncle in all ways, though it is obviously dead and the colorless stone in its head is reduced to worthless dust.

As a standard action three times per day, a carbuncle can concentrate intently on one creature within its line of sight and attempt to impose its will upon the target. A DC 16 Will save is enough to resist this compulsion. If the target fails to resist, roll 1d6. On a result of 1-2, the target gains a flash of insight and a +2 insight bonus to its Armor Class for 1 minute. On a result of 3-4, the victim is affected as if by suggestion for 1 minute, and must follow a single (usually embarrassing, always harmless) suggestion from the carbuncle. On a result of 5-6, the victim’s thoughts are garbled with those of the carbuncle, imposing a -2 penalty to the victim’s Will saving throws for 1 minute. This is a mind-affecting effect. The save DC is Charisma-based. 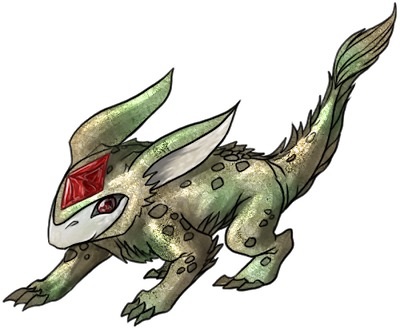