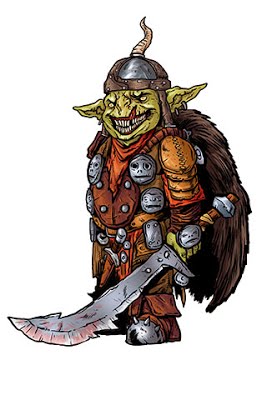 Goblins prefer to dwell in caves, amid large and dense thickets of thistles and brambles, or in structures built and then abandoned by others. Very few goblins have the drive to build structures of their own. Coastlines are favored, as goblins are quite fond of sifting through junk and flotsam in an unending quest to find treasures among the refuse of more civilized races.

Goblin hatred runs deep, and few things inspire their wrath more than gnomes (who have long fought against goblins), horses (who frighten goblins tremendously), and regular dogs (whom goblins regard as pale imitations of goblin dogs).

Goblins are also quite superstitious, and treat magic with a fawning mixture of awe and fear. They have the habit of ascribing magic to the mundane as well, with fire and writing both taking on mystical power in goblin society. Fire is much loved by goblins for its capacity to wreak great destruction and because it doesn’t require size or strength to wield, but written words are hated. Goblins believe that writing steals words out of your head, and as a result of this belief, goblins are universally illiterate.

Goblins are voracious and can eat their body weight in food daily without growing fat. Goblin lairs always have numerous storerooms and larders. While they prefer human and gnome flesh, a goblin won’t turn down any food—except, perhaps, vegetables.

An arctic goblin is furrier than its kin, covered with white hair that grants it cold resistance 5.

Those who seek shelter in the endless caverns of the deep underworld grow large bulbous eyes that grant darkvision out to 120 feet and long spidery limbs that give them a +5 racial bonus on Climb checks.

A few goblins attain a much larger size than their kin. No one is exactly sure why they grow to be giants among their kind, but it’s probably due to a combination of luck, diet, and constant access to food. These goblins are monsters among their own kind, not just in height, but also in girth and in strength. If not cast out for eating all of the tribe’s food, over-sized goblins often become the bosses of their tribes, and the most powerful of them become chiefs. Over-sized goblins are Medium size, and grow to 4 to 5 feet tall. They tend to be particularly obese, weighing between 225 and 275 pounds. Instead of the normal racial ability score modifiers for goblins, over-sized goblins gain a +2 bonus to Strength, a +2 bonus to Dexterity, and a –2 penalty to Charisma.

These goblins hail from the deeper parts of the world. They gain darkvision 60 feet, light blindness, two claw attacks that deal 1d3 damage, and a climb speed of 20 feet.

These goblins have been touched by aberrant influence. They gain light sensitivity and the gibbering ability (see gibbering mouther) which can be activated as a move action with a range of 30 feet. These goblins are born of dark energies, and are immediately identifiable by the flames that dance in their mouths. They are immune to fire and gain a bite attack that deals 1d4 damage plus 1d6 fire damage.

This type of goblin has an unusually long tongue. As a standard action, they can use their tongues to perform disarm or trip attempts against targets within 10 feet with a +2 racial bonus and without provoking attacks of opportunity.

Some goblins are born covered in soft thorns that grow rigid as they mature. These goblins gain a slam attack that deals 1d3 damage plus grab. In addition, a creature in a grapple with the thorn takes 1d3 damage at the beginning of the thorn’s turn, and any an attacker who successfully strikes the thorn with an unarmed attack or natural weapon take 1d3 damage.