This brightly-colored primate has a bushy mane, dense fur, and a long ridged snout.

Mandrills are generally passive creatures and rarely engage in battle, preferring to outmaneuver would-be-attackers by taking to the trees and outrunning their opponents. If the young are threatened, they do not hesitate to attack. Mandrills defending their group always fight to the death. Likewise, a foraging pack that is molested defends its “treasure” if food is scarce; otherwise, it usually drops its food (or sticks it in its cheek pouches) and scurries into the trees. 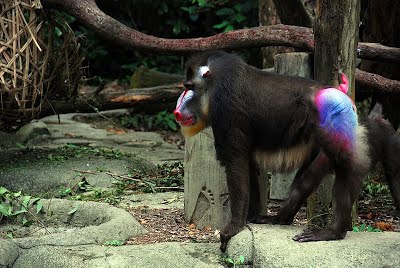 Mandrills are diurnal and terrestrial primates found in warm forests. During the day, mandrills spend their time on the forest floor, hunting and foraging. At night, the animals seek shelter and refuge in the trees. They subsist on a diet of fruits, nuts, berries, small insects, seeds, roots, and occasionally grass and the typical group has a hunting ground of 5–8 square miles. When foraging, mandrills use their powerful hands aid in pulling bulbs and digging roots. A mandrill is equipped with cheek pouches that begin to the side of its teeth and extend down its neck. The animal can hold almost an entire meal in its pouches. It often stores food in its cheeks while it continues to hunt or climb.

A typical mandrill group consists of one or more males, one of which is an alpha male, several females, and an equal number of young (that do not fight). Females have a gestation period of about 5–1/2 months and young are born live (usually in the late winter or early spring months). Young generally stay with their mother for about a year (females usually a bit longer, males not quite as long).

The average adult mandrill reaches a height of just under 3 feet tall and weighs around 35 pounds (though some males generally weigh around 50 pounds). A mandrill’s fur is olive brown fading to a paler color on its underbelly. Adult males have a bright blue and red snout and a yellowish “beard.” Females and young mandrills are likewise colored, but their colorations are duller.