This massive beast vaguely resembles a rhinoceros with a forked nose horn. Its powerful body is covered with short bristly hair. 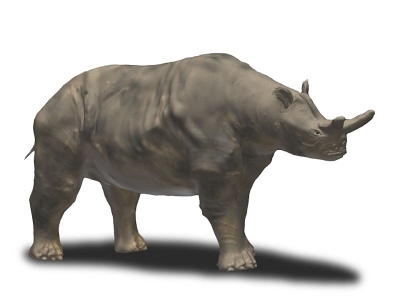 Brontotheriums (also called thunder beasts by some primitive tribes) are found on lost continents and large islands far from civilization. They dwell in wooded primeval forests bordering broad plains where there is plenty of vegetation for these herbivores to feast upon. They generally forage at night, in the early morning hours, or early evening hours so as to avoid the midday heat.

Territorial, herds tend to keep to themselves and sometimes clash with other herds of their kind, except on common ground (water holes, foraging areas, and so on). When two herds meet (on any ground other than mentioned above), the males quickly charge, butting heads and goring with their horns in an attempt to force the other herd to leave the area.

Mating season for brontotheriums occurs anytime throughout the year. A male selects a female and fighting often ensues between them before the mating ritual begins. Gestation lasts for 400 days after which time the female gives birth to one live young. Within one year, the young becomes independent and no longer depends on its mother for food and protection. Maturity is reached within 10 years (15 for females) and brontotheriums have an average lifespan of 40 years.

A brontotherium weighs two tons, is about 14 feet long, and stands eight feet tall at the shoulder. Its fur is dark brown or grayish-brown.

Brontotheriums defend their herds from hunters and predators by charging and goring foes with their massive horn. When a herd is in danger, they charge, tearing up everything in their path and trampling any lesser creatures which stand in their way. Sometimes before charging a brontotherium lets out a snort, growl, or roar to warn potential adversaries of its intent. If locked in combat defending the herd or young, a brontotherium always fights to the death.